What is the likely origin of British willow pattern porcelain? 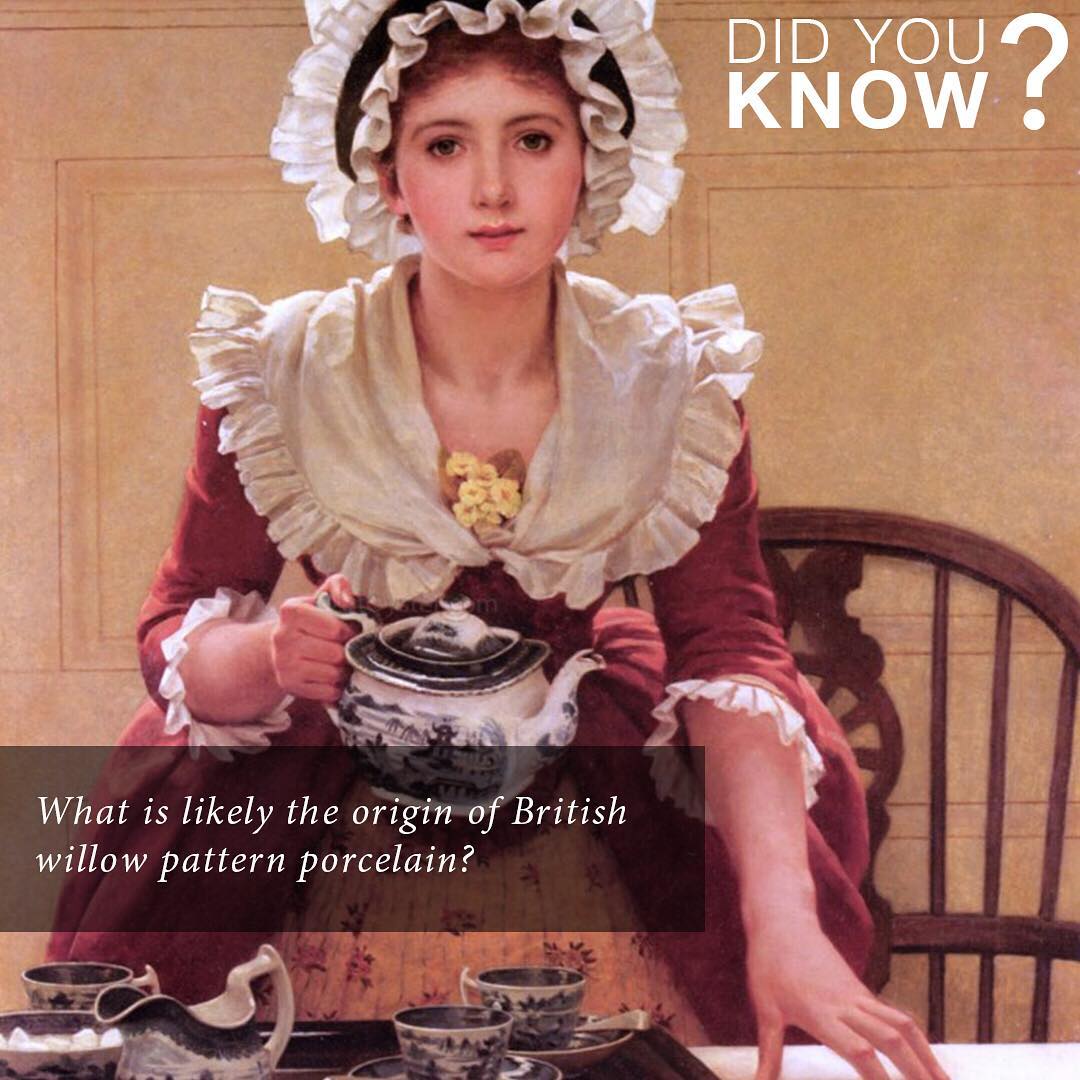 The willow pattern, in the traditional Chinese blue and white, is supposed to have originated at the Caughley, Shropshire, porcelain works about 1780. It was quickly copied by migratory engravers in the factories of Staffordshire and other parts of England. A story differing in detail at the hands of various raconteurs but retaining its main essentials is told about the willow pattern, which is said to illustrate the legend of Koongse and her lover Chang.
⠀⠀⠀⠀⠀⠀⠀⠀⠀
⠀⠀⠀⠀⠀⠀⠀⠀⠀
Koongse was the beautiful daughter of a wealthy mandarin, who lived in the two storied house in the center of the pattern. There is an orange tree behind the house. A willow tree overhangs a footbridge. Koongse lost her heart to her father’s secretary, Chang. This greatly angered the proud mandarin, who ordered Chang to keep away from the place. As further precaution, he betrothed Koongse to a wealthy but dissolute old Tajin (Duke). The father then built the palisade, or fence, that appears across the foreground of the picture, in order to keep Chang and Koongse apart. He allowed her only the freedom of the garden and teahouse encircled by the stream.
⠀⠀⠀⠀⠀⠀⠀⠀⠀
⠀⠀⠀⠀⠀⠀⠀⠀⠀
The lover, Chang, floated messages of love and devotion down the little stream in a coconut-shell to his fair one. On the evening of Koongse’s first meeting with her hated fiancé, he presented her with a box of jewels. After the guests had feasted and the Tajin was drunk with wine, Chang slipped into the banquet-hall disguised as a beggar and signaled Koongse to flee with him.
⠀⠀⠀⠀⠀⠀⠀⠀⠀
⠀⠀⠀⠀⠀⠀⠀⠀⠀
Afternoon Tea by George Dunlop Leslie (1865)
⠀⠀⠀⠀⠀⠀⠀⠀⠀
⠀⠀⠀⠀⠀⠀⠀⠀⠀
Excerpt from The Romance of Tea